Hello everyone. Now that the NDA has been lifted from MTGA and the wipe has occurred, we’ve all been gifted 10 starter decks, 12 booster packs and the will to play as much as we can.

I’ll be breaking down these 10 decks to help you choose which one you’d like to spend a little time upgrading and what kind of upgrades you should be looking into to suit your playstyle and deck. I’ve separated these 10 decks into aggressive, midrange, and control strategies and will have a corresponding article for each deck. We’ll be going from most aggressive to most controlling.

Before we jump into the most popular archetype on the ladder, I should mention, my main advice to winning the most on the ladder is to play with all of the preconstructed decks that appeal to you and find one that you like the most. Then using your booster packs and wildcards that you have, find upgrades for that deck and continue playing with it until you feel comfortable that you can contend with most opponents you find. 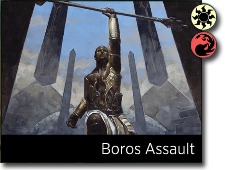 First up is our most aggressive of the bunch. The main strategy of the Boros Assault deck is to go face. The face is the place and everything that doesn’t directly let you go to the face, helps you clear the way for your beaters to get in until your opponent is deader than dead. A sub-theme in this deck is that you’ll find a lot of creatures with the ability to exert them while attacking making it harder for your opponent to block. Finally there are some bigger, “go-wide” cards in this deck that help push you over the top. Some that come to mind are Combat Celebrant, Angel of Condemnation to help remove blockers and Adorned Pouncer’s eternalize ability will help you close out games.

You’ll want most games with this deck to start with some early cards like Fanatical Firebrand or Bloodlust Inciter on turn one followed up by your plethora of two drops. Making sure you use most, if not all, of your mana every turn is key to applying the most pressure and making your opponent answer what you are doing. If your opponent's creature doesn't have lifelink and you can still attack profitably into their board, do it. finally , you’ll want to end the game with a wide enough board (sometimes with the help of Rallying Roar) or possibly some “pingers” like Fanatical Firebrand, Fervent Paincaster, and Resolute Survivors.

Upgrades for this deck are pretty straight forward, in that they get closer and closer to a mono red deck splashing white for some key pieces. As far as commons are concerned, just a few Gust Walkers or possibly some extra Fanatical Firebrands would do nicely, however those are cards that we will be cutting later on down the road. Uncommons will really help this go from a beginner strategy to something much more competitive, very quickly. Having a full playset of Lightning Strikes, a few Abrades, Relentless Raptors and Sky Terrors to have great threats at two. Skymarcher Aspirants for 1 drops, Ahn-Crop Crashers as your main 3 slot will all go miles in improving your reach. Also picking up a second copy of Shefet Dunes in the mana base will certainly help win some of those stalled boards. 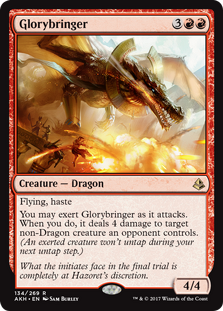 Rares: Glorybringer!!! BRING THE GLORY. ALL OF IT. ALL THE TIME.

Aside from Glorybringer, your first copy of Vance's Blasting Cannons will certainly help keep the cards flowing, and Glory-Bound Initiate is a great threat as early as turn two but still has legs later in the game. Having a Kinjalli's Sunwing or two will help keep blockers to a minimum. As you go through the red rares under 4 mana, you’ll find that almost all of them could be put in this deck, because almost all of them have some kind of aggressive, damage dealing nature. As I scroll through them I can see, Soul-Scar Mage, Dire Fleet Daredevil, Earthshaker Khenra, Tilonalli's Summoner, Captain Lannery Storm, Insult, Path of Mettle and Rampaging Ferocidon, all of which could be good.

Before we get to the Mythics you might be noticing that there are quite a few upgrade suggestions. I want you to be aware that I do not expect all of these cards to go into the same deck, but they all could be in this deck. As I’m typing this up, I’m realizing that one upgraded list will not cut it for this R/W deck and as such, you’ll notice a R/W exert deck to take advantage of the exert mechanic, and a R/W Dino deck to have the biggest faster creatures that are around.

Compared to the laundry list of rare cards to help upgrade this deck, the mythics are fewer and far between but very potent. As I mentioned earlier the closer we can get this deck to a Red Deck Wins strategy, the better it will become. Because of this, Hazoret is the first and second mythic I would construct here. After I had at least two copies, I might suggest, having some fun with Oketra the True, Rekindling Phoenix, and Huatli, Warrior Poet. Don’t fill up too much on these 4 and 5 drops as the main aggression comes from your lower curve.

Finally onto the decklist

Here is what I would consider a budget friendly decklist. I took out some of the cards that were a little off plan and added in 1 Mythic, 2 Rares, 3 uncommons and 4 commons to streamline the deck and take you to the top of the ladder. This is a great place to start if you have a few wildcards to use.

60 Cards
back to Historic Decks

Unplayable Deck
This deck is not currently playable as it contains cards that were removed from the game in the Sept 27th 2018 patch.
Boros Assault (modified)

Let me know what you think about the Boros Assault in the comments below. What cards are you excited to play with. Make sure to tune in next time where we go in depth on the Brazen Coalition and where you can take it.

If you like what you see or have questions, feel free to come drop by the stream at twitch.tv/draconis2000.

Number of cards by rarity in this import.

This import contains reprints. You can select alternatives for these using the dropdown below. The appropriate card on the left will be replaced with the selected alternative.