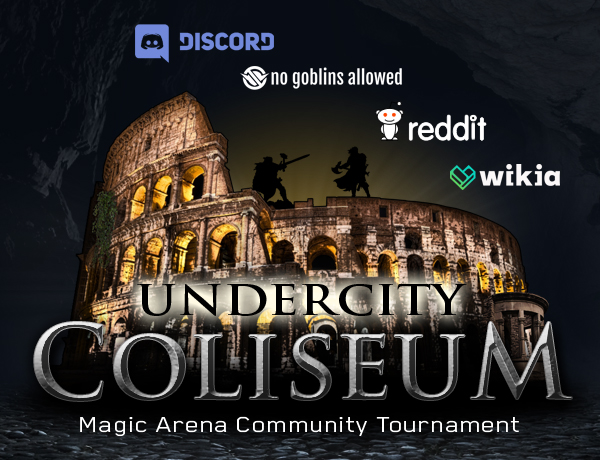 we proudly welcome you to the re-opening of the Undercity Coliseum which has always been one of the most famous places for entertainment in Ravnica. Continue your journey to the fighting pits and be one of the first to enter the battle ground where the audience awaits a fantastic spectacle, but be warned this is a fight to the death and only the last one standing will hear the deafening applause.

So, ready your spears, swords, shields and mighty spells! Step up to the challenge and show Ravnica that YOUR guild is the best and YOU are a worthy Champion of the Undercity Coliseum!
This is the official page for the Magic: the Gathering Arena Community Tournament "Undercity Coliseum". The general purpose of this event is

So, if you're wondering if this is the event for you, go ahead and take a look at the details below. It doesn't matter if you are a seasoned pro or a beginner who wants to try out playing in a tournament — Everyone is welcome! Oh, and of course, there will be prizes!


Following are the official Tournament Rules. As a participant please make sure you read the rules carefully before you register for the tournament. By registering you will declare that you agree with these rules. In case you have questions feel free to contact the organization team via email.

Player registrations are open from November 21, 2018 to November 30, 2018.
The tournament launches with Round 1 on December 3, 2018. During swiss rounds players will have one week to play their match.

Match results need to be reported by both players by filling out this form.
Not reporting or reporting after a round has ended, can lead to a match-loss or DQ.

Your duties as participant in the tournament are these:

After all rounds are completed top 8 players will be passed to the next round, scores will take win rate in consideration. In case of ties there will be a sudden death tie breaker round.

All decklists will be public during the tournament. Each player will register decklists in secret via the provided Google form. Decklists then will be published on the Magic Arena Wiki once all submissions have been received.

Submission due date is November 30, 2018 23:59 UTC; decklists sent after this date will not be considered.

To send your deck simply use the export button on MTG Arena client and paste it to the registration form. Sending your decklist via the Google form is what actually signs you up for the tournament.

It is your responsibility as a participant to ensure the posted decklist matches the decklist you intend to play before the tournament commences, so check the player decklist link and ensure what is posted is correct.

Organizers who wish to participate in the tournament will be required to register their decks on November 21, 2018. These decklists will be public on the same date to prevent any suspicions about cheating or optimizing their decks according to submitted data from other players.

The first penalty for playing an illegal card (otherwise known as a card not on your submitted decklist) is a game loss. The second penalty is tournament expulsion. We suggest creating a special copy of your tournament deck and giving it a unique name so that you never modify it by mistake.

If any illegal actions are reported at any time penalties will still be enforced, but will not change previous results.

Streaming and/or recording games for the Swiss-rounds of play are not required for this tournament, though it is highly recommended in case there is need of arbitration. Without a video to watch we cannot arbitrate the match, so if there are any discrepancies you will have to replay the games in question.

Streaming/recording is required for Top 8 matches. Players unable to record/stream for top 8 bracket will be dropped and thrown into the dog pits. The next eligible player will take their spot on the match. Once the game is over, both players will send links to their videos so the Lords of the Coliseum can critique your gameplay.

If you decide to record and/or stream, games can be recorded via 3rd party recording/streaming software (such as OBS or other suitable freeware) via Twitch using autoarchive, or you can use YouTube streaming services.

If you do stream your match via Twitch.tv, or YouTube, we would prefer that you minimize any chat windows for the match, but no one is required to do so by any rules. We realize many players (and audience members as well) like to interact during the match, and that is great. However, if we feel there is a perception of coaching and/or cheating, the player will be punished accordingly.

Remember, this is a free, fun, tournament. Let the players play, stay out of your opponents’ Twitch stream, and stay out of their decision making.

If there is a disconnect, we will assume that it was unintentional and you try to reconnect or replay the match unless it is clearly obvious that one of the players had an insurmountable advantage and would have likely won. This needs to be agreed upon by both players, and we need to know this via email that you both were in agreement. Otherwise, replay that game.

Remember this is a friendly tournament that aims to promote a fun and competitive tournament environment. Don't be a dick… that’s our job. But also, don’t be afraid to call an issue to our attention; just be respectful.

A lot of these have been corrected, some have not, and some might be new. Instead of going over individual cards, here is the basic rule: you, the player, will have (hopefully) been practicing with your deck for some time and know any buggy interactions that occur with the cards you have selected for your deck.

Regardless of what you can do, don't do anything that is contrary to the rules of the cards/game as written. If the game forces you to do something that is contrary to the rules, make it right (e.g. if you get away with casting/doing something for free and there should have been a cost, add the appropriate mana to your mana pool and let it drain at the end of the current phase).

If there are any questions or something happens mid-game, finish the game and send us a video of the event, if you have it… we’ll make the rules call. If there is no video available from either player and you have a rules issue, replay the game.

If a card causes a disconnection, before the next match starts, the Lords of the Coliseum will allow all players the option to replace the card(s) in question if it is in their original decklist for the rest of the tournament. If players do not change the card out, any further bugged interaction caused by that card, either by the original player or others in the tournament, will cause that player to receive a game loss.

Holy is the head judge for this tournament. All rules, arbitration, will be conducted by him for the entirety of the tournament and all decisions are final.

If you are recording/streaming and there is need for arbitration, finish the games and match and send it to us with details including timestamps so we can arbitrate the issue as fairly as possible.

If you and your opponent are not recording/streaming and you require arbitration you need to replay that game as we have no means of arbitrating. It pays to record/stream.

Don't cheat. Pretty much that simple. This includes stream sniping, taking advice from your audience while on twitch (also known as coaching), someone else watching your opponents gameplay and feeding you information, etc... Penalty for cheating, whether it is defined in the rules as written or defined at a later date, is immediate DQ and ban from future tournaments.

If you think it could be cheating, you probably shouldn't be doing it. If you have questions about it, email or PM us soonest.

If you think your opponent is cheating or has an illegal deck list, if you are recording/streaming send us the video with the timestamp of the occurrence. If you are not recording/streaming, try and take a screenshot of the offense and send that to us.

The tournament takes a long time from start to finish to wrap up, and we can’t see the future. Things happen; real-life syndrome gets the best of us, and that’s to be expected from time to time. But, we want to make exiting a bit more standardized.

If you have to leave, contact the organization team and let us know you are leaving due to real-life issues.

If you have to leave in the middle of a round, contact us and your opponent letting us know you are conceding and dropping from the tournament.

The major takeaway is when someone leaves the tournament, any opponents that person has played will have a harder time having a chance getting into the top 8. If you can, play for glory, play your matches, and give your opponents the best shot you can.

Before the beginning of the second or subsequent game in a match, players may change the composition of their deck by exchanging cards from their deck for cards in their sideboard. This is a one-for-one exchange, meaning if you started the match with a 60-card deck and a 15-card sideboard, after sideboarding your deck will still have 60 cards.

Players are not required to reveal how many cards they have swapped from their main deck to their sideboard.

Don't be a dick. Seriously. Only those deemed worthy by the Lords of the Coliseum have that privilege, and only if it's absolutely necessary. Your job is to have fun and try not to get turned into dog pit fodder. If you have a problem with the gameplay, getting together with your opponent, the way something went down in the game… whatever the problem, the correct answer is to let us know and we will deal with it.

If any play, interaction, bug, etc… gets under your skin, puts you on tilt, gets you salty, whatever… stop and give yourself five minutes between a game to chill and get your head on straight. This is a friendly competition, so treat everyone with respect (including yourself).

In addition to the tournament rules, we gathered some frequently asked questions as clarification. You can take a look at them here.

If you want to support the tournament by contributing to the prize pool, don't hestitate to contact the organization team by sending an email to mtga.organizer@gmail.com.

Retrieved from "https://magicarena.fandom.com/wiki/Undercity_Coliseum_Community_Tournament?oldid=25937"
Community content is available under CC-BY-SA unless otherwise noted.